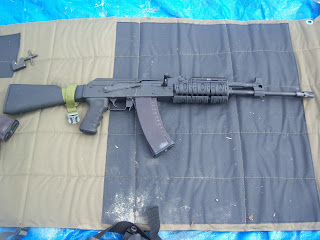 I was able to shoot just under 300 rounds down the M10-545 this weekend.  I planned to do some more but conditions were less than ideal: 25mph gusty winds at almost a direct crosswind, 30 degrees Fahrenheit, and occasional light snow with already muddy ground.

Cycling as expected was fine, despite the front sight cant.  The windage on the RPK rear came in handy as a quick fix instead of the somewhat of a guessing game that you have to do adjust the front sight for windage.  I did need to lower the front sight a lot.  Sighting in at 25m, I was able to get some of my best AK iron sight groups, I had several under 1" with 3-4 rounds touching.   I wasn't able to get much paper target shooting done at 100m like I wanted to, but I did get to send about half a magazine at my 8" round steel target and was able to hit with no problems at all.  The gas piston, despite looking like it has a proper gap to develop wobble, hasn't yet. The piston seems to be cycling against the gas block only slightly, resulting in very small wear line on part of the piston.  But this is not anything I would call excessive, especially since I can't see any marks in the gas block and the bolt carrier isn't binding.  While I'm not really worried about this wear, fixing the front sight cant or developing piston wobble would remove this altogether.

All of my "Bulgarian" sanitized (probably Russian) mags worked fine.  My Circle 10 surplus magazine worked fine, but my Circle 21 will not fit.  This looks to be due to it hitting the cross support behind the magazine well as shown in this thread at AR15.com.  While it isn't related to the fit issue, the Circle 21 is my least reliable magazine in my AK74, it caused at least 4 misfeeds this trip so I'm not too heart broken it won't work.  I'd just have to be careful with my future magazine selection for the M10-545. Also my Tapco magazine would not fit until I did some file work partly on the back but mostly on the side tabs on the back of the magazine close to the rear lug.  The ProMag fit and fed fine but I'm still hesitant use it for anything other than range work.

While I would still like to see it at night, the flash hider was noticeably more effective eliminating flash than the 74 brake on the Bulgarian rifle.  As to be expected though, all three shooters observed less muzzle flip with the brake.  Colorado Guns assures me that the Flash hider is NOT soldered on like some of us think.  They just torque it down really tight since there is no plunger pin.  I have been able to remove it from my M10-22 but not the M10-545 yet.  They recommend a screwdriver through two of the ports as the best way to put it 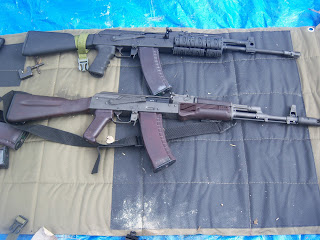 I had a light on the railed handguard and it did fine with that.  Partly due to the lack of 2 screws in the handguard I didn't want to test a red dot on it.  However, it does look like these screws are pretty standard because I found a couple from an old scope ring that fit the day after I went to the range.


The balance difference was noticeable as well as all three shooters said the M10 felt a little "handier" than the AK74.  Everyone also liked the Hogue grip.  The rail covers held on fine but there wasn't a bunch of intense drills either. The AR shooter felt more at home with the covers on as well since the handguard feels very close to an AR with them.  Heat was not an issue with the handguards, but then again it was cold out and we had gloves on.

While I was hoping to get a longer range session in, at least I am now much more confident in recommending this rifle as a good entry level AK.  I do believe it is a step up from a WASR with the included accessories like the RPK sight and Hogue grip and more attention to details like the magazine well.  I would bet the M10-762 is a good rifle as well.  Part 3 will follow eventually when I get this rifle trimmed out the way I want it.

Again, thanks to Atlantic Firearms for selling me this rifle at a discount!  Check them out, they are excellent!
Posted by AK Matt at 8:04 PM