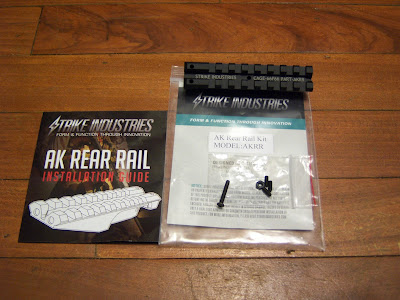 Despite seeing it and other similar mounts pictured before, when it arrived I was a little surprised by how lightweight and compact it was.  My first thought that it was something that would in fit well on a minimalistic AK. The package includes the rail, 3 set screws, one cross screw with nut, and installation guide.  The rail seems to be of high quality aluminum and good black anodizing.  The guide is in a small booklet and well done for the part of the getting the rail on.  However, it is a little lacking on how to get the AK rear off and if you should remove the rear sight leaf spring. Other similar mounts differ on if to keep this spring in or not, and according to Strike Industries, this mount works best if you remove the leaf spring.

To remove an AK rear you should use some object like a screwdriver to push down on the leaf spring in the gap between the sight and the muzzle end of the rear sight block.  Setting the elevation of the sight all the way forward can help with the removal.  As enough pressure is applied you can pull the sight out with your other hand or even pop it out with the right pressure/tool.  Then pull the leaf out towards the muzzle.  On this particular rifle my spring was a little tough to pull out, I needed to get it high enough to clear the bevels inside the rear sight block. 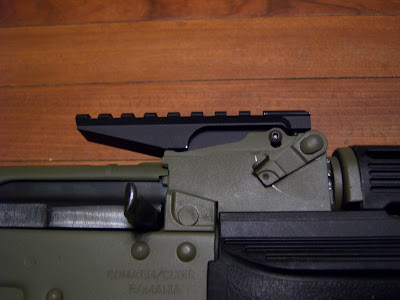 Once you get it out the install becomes very straight forward and as described by the booklet.  The cross screw goes horizontally through the mount and the holes in the rear sight block.  Use a 2mm hex wrench for this screw and 1.5mm for the set screws. One nice touch is that the cross screw's hole is threaded which will allow the sight to be adjusted for windage.  However, adjust this screw first, once the set screws are tightened the mount is solidly in place.  Sometimes mounts like these can have problems with tilting forward or back, but since the set screws are on both sides of the fulcrum (the cross screw), this seems to make it much more stable. 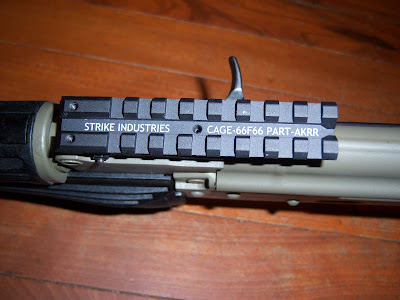 By adjusting the set screws you also have some ability to change elevation, but they should be adjusted on both sides so that the mount does not freely move up or down.  As always, don't overtighten and use threadlocker, there are many mounts that have been trashed by overtighting! 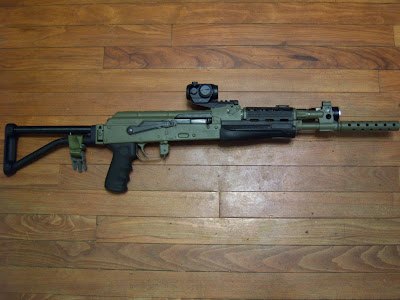 I plan on using a Primary Arms detachable base Micro Red Dot Aimpoint clone with this mount.  While it definitely is not as good as the Aimpoint, it does have a solid reputation that should allow me to give this mount an honest test out at the range. Also, Strike Industries has eluded to adding other similar optic specific mounts to their product line.  I'm hoping they will come out with an Aimpoint Micro speicifc one that should let me use this optic as well.

Some of the comments on this rail have been that results in a high mount.  Honestly, many AK mounts have this problem, especially most of the imported side rail mounts.  Through my dry practice and measurements, the rail actually has a quite usable cheek weld and still sits lower than many side rail/mount combos. Yes, it is still higher than an Ultimak railed gas tube or a TWS Dogleg, but the Strike Industries rail is less than half their prices and debatably requires less changes to the rifle than the other two.

For my measurements, I used the line between the receiver and the front trunnion.  I found that this gives a nice solid line that allows for easy and consistent measurements.  The standard AK rear sight at Battlefield Zero sits at about 1.7", while the Strike Industries mount only sits just .2" higher at 1.9".  Mounting the Primary Arms Micro put the bottom of the rear lens at about 2.2" high.  When compared to my Romanian M10-545 side rail with one of the lowest Eastern European mounts out there, the BP-02 side mount, the Strike Industries rail is actually a slightly lower height.  It has another advantage over the BP-02 as well in that the iron sights can still be used.

Strike Industries put a channel through the rail and added two dots that can be painted in to give a basic rear sight picture.  Although the channel is wider than standard rear sights and has a limited field of view with the optic mounted, it seems to be usable and I feel it will serve well in the backup sights role.  I'll definitely be doing some tests of the rear sight both with and without the optic at the range. 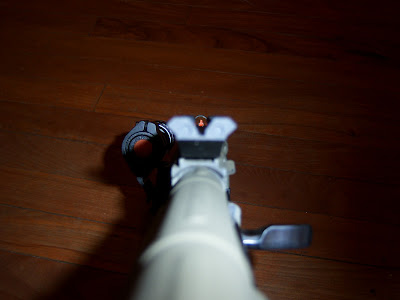 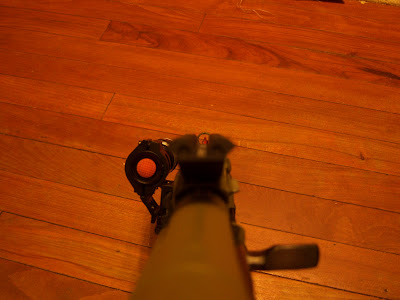 For the price, the Strike Industries AK Rail looks to be a simple yet effective method to mount a small red dot.  It is also an interesting entry into the AK market for the company.  I look forward to getting some range time in with the rail and Strike Industries new AK line of products as well!  Part 2 to follow as soon as I can get out to the range. (Here it is!)

Disclaimer:  This mount was provided free of charge from Strike Industries for this review.  I hope to keep working with them to give more information about their new products.
Posted by AK Matt at 3:56 PM