Night Brakes and others 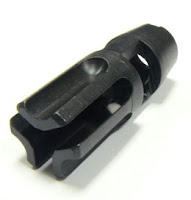 And on the reboot, just saw this over at CNC Warrior, the Night Brake. Looks like it could be a inexpensive alternative to the PWS FSC47 compensator with flash controlling features (still not as good as a true hider).
I've been looking at a lot of 14x1MM LH brakes lately to put on my Draco pistol. The rest of my AKs tend to have hiders, save the 74. The look of the 74 style brake is one of the few aesthetic things I dig enough on AKs to go for looks over function, but it is also partly due to the lack of cool looking 24mm hiders. But the Manticore Nightshroud II might win out eventually. Coincidentally they have a Night Brake for 24mm as well.
I tried the slant brake on the Draco and it does cut some muzzle flip but decided to go for something else. While it isn't much of an issue on a pistol Draco, I still believe that they a lot of times contribute to AK inaccuracy.
Due to me being poor this summer (just had our second daughter), I cheaped out and went for the Tapco slot brake, which seems to have some good reviews but I haven't got to shoot it yet. I also want to try the US bastardized "Krinkov" and 74 brakes which of course both deviate from the original Russian designs but are cheap and common in 14x1MM LH.
The CNC Warrior VZ58 looks interesting and effective. Then there is the TGI series of brakes seems to be the the Swiss Army Knives of muzzle brakes since they are listed as a "muzzle brake/flash hider. Wire Cutter. Door breaching device. Glass breaker." LOL The Bart is the most aggressive and amusing at the same time with the name, but I would probably go for the Castle style. The King Armory KA-1230T is also on my radar but there seems to be very little actual end user reports on it.
Posted by AK Matt at 5:51 PM