Strike Industries has came out with another interesting product for vertical foregrips (VFG).  This time it isn't just AK oriented but has a major selling point to tactical AK owners.  Using an traditional VFG on an AK is problematic since it can block the rock in magazine loading process.  Strike Industries' new PARA (Pyramid Angled Rail Adapter) will angle back any standard VFG to 17 degrees, which is about the same grip angle as a Glock.  This improves the ergonomics of a standard VFG.  All of our grips on pistols and rifles are angled, but yet few foregrips are as well.  The other times I've played around with VFGs, I've never liked their perpendicular angle.  While VFG use isn't quite in vogue as it used to be, I do personally like angled VFGs if you are going to use them as an actual grip and not just as a large handstop.

While this feature is great for AK owners that want to put a short VFG out far on the a railed handguard, the PARA can also allow a new tactical twist on a AK classic, the Romanian pistol grip handguard (often referred to as a certain part of a donkey's anatomy): 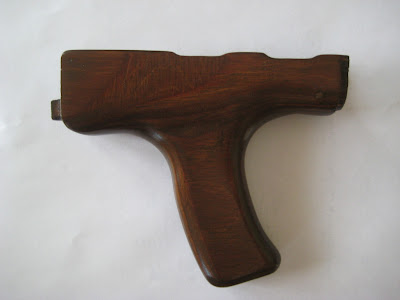 (Thanks mikeplan14 of INGO for the photo!)


With the PARA you can angle a VFG forward like the Romanian grip and still have room to rock in a magazine: 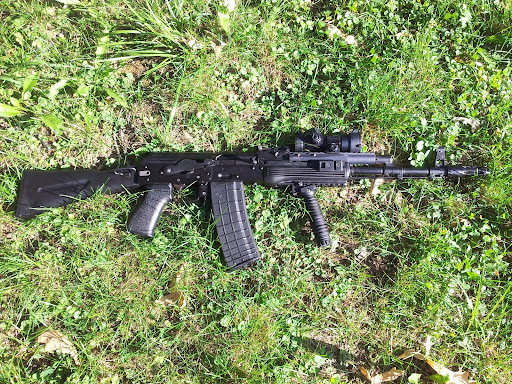 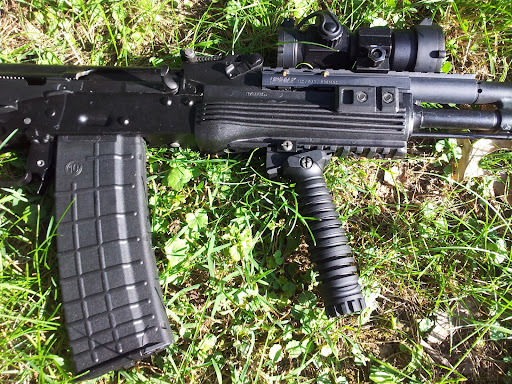 I coupled the PARA with a Strike Industries Dura Grip.  They make quite a combo, both are solid, high quality aluminum just like their AK mount. Also like the mount, the PARA and Dura Grip have robust black anodizing. As you can see, I was able to mount the PARA pretty far back with the full length Dura Grip and still have enough room to rock in this 5.56x45mm magazine.  More curved 7.62x39 magazines may require a little further forward placement, but it will still be further back than a regular VFG of this length.  If you like the Romanian pistol grip handguard but want something a little more modern, this is definitely the way to go. It will allow the most rearward positioning of a AK VFG and I think still feels more comfortable than a perpendicular VFG.  For comparison, knives will often sweep somewhat forward in their handles, which is an ergonomics feature that obviously works in a lot of cases but is rarely used in firearms.  In the end, the swept forward PARA still feels like the traditional Romianan handguard, but gives you the modern capability and looks.

This combo is pretty versatile.  If you are one that likes to mount VFGs as far forward as possible, you can take advantage of the PARA's improved ergonomics if you use a "stubby" VFG.  This is probably my personal favorite PARA configuration just because I like the more similar feeling between the foregrip and the pistol grip.  The nice thing about the Duragrip is that it has a screw off extension that allows it to be a stubby VFG as well.  This does take the water resistant compartment capacity down to 2 CR123 batteries instead of 3 though. 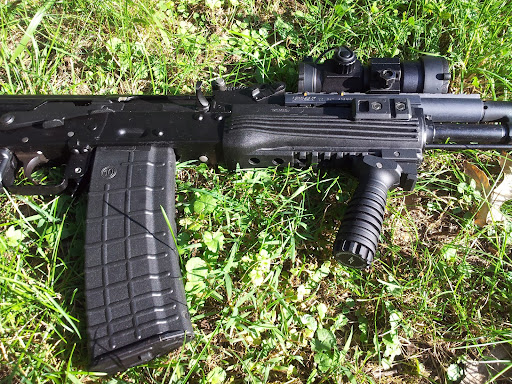 The Dura Grip is built like a tank and is great quality.  However, due to it's clamping groove cut in the top of the grip, it isn't waterproof, although the bottom cap is O-ring sealed.  If you require that or a light tape switch cutout and want to stay with SI, there is also Strike Industries' Dura Grip Pro version

One other interesting thing I was able to do with the PARA is add a handstop to it.  This made it very similar in profile and feel to Magpul's Angled Foregrips. 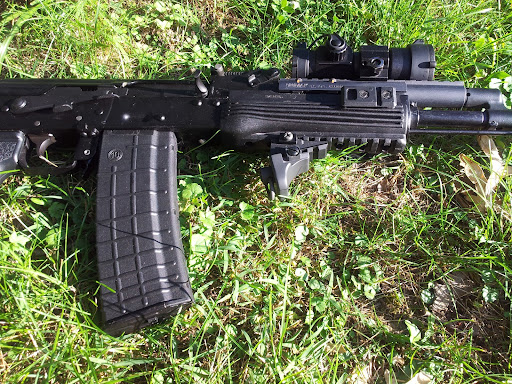 Overall, the PARA is a neat little piece that gives you a lot more flexibility in mounting foregrips to your AK.  While I know not everyone likes VFGs on AKs, if you are in this crowd, I definitely recommend the PARA.  One other use Strike Industries suggests but I didn't get to try is using it to angle down a light for trail navigation or search and rescue work.  The PARA weights just 1.3 ounces and has a screw-on clamp that doesn't require sliding it all the way down the rail to position it.  It lists for $30.

The Dura Grip is a excellent quality VFG that weights in at 3 ounces in stubby configuration and 4 full size.  Note that the Dura Grip does require you to slide it in place and then screw in the cross-bolt.  So if you do have anything else on the rail you would have to remove it before installation (or get even better, mount it to a PARA first).  Its list price is $40.95.


Disclaimer:  Strike Industries provided the PARA free of charge and the Dura Grip at cost.  The more is see from them, the more I am excited to see what they are bringing out. I do feel they offer great quality gear at good prices and wouldn't partner with them if I didn't. Hopefully they will extend their AK line soon!
Posted by AK Matt at 8:05 AM